The San Francisco Municipal Transportation Authority has placed ads condemning the racist message of 'support Israel' ads placed last week by noted Islamophobe Pamela Gellar, who referred to Palestinians as 'savages.'  The new ads were placed as a result of pressure brought to bear by a coalition of organizations lead by the American Muslims for Palestine, the Council of American Islamic Relations and the Asian Law Caucus. 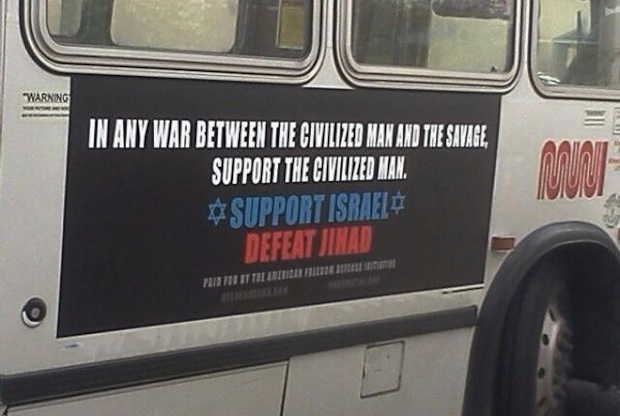 "We consider this to be a major victory," said AMP Chairman Dr. Hatem Bazian. "But more work obviously needs to be done. We are continuing our talks with the transportation authority. This comes at a time when at least eight or nine attacks against Muslims have occurred recently throughout the country, the  most recent being the descretation of the gravesight of an Arab American community leader in the Chicago this weekend."

Below are two letters to the transportation authority with specific demands for further work to combat anti-Arab and anti-Muslim bias in San Francisco. At least 75 organizations and community leaders have signed on to the effort.

Dear Mr. Reiskin:
We write to submit a letter signed by 75 organizations and 35 leaders expressing concern and dismay over advertisements sponsored by The American Freedom Defense Initiative and running on MUNI buses in San Francisco. We note here however in this cover letter, some more specific requests of the San Francisco Municipal Transportation Agency (SFMTA) which reflect our perspectives as community-based organizations directly serving the impacted communities here as well as the feedback we have received over the course of a week-long community assessment.

While we appreciate the explicit disdain for the advertisements expressed by both yourself and SFMTA Chairman Tom Nolan on August 14, 2012 we note that simply expressing disapproval and donating advertising revenues to the San Francisco Human Rights Commission (HRC) will not sufficiently change the course of the negative community impact of these advertisements. It is our belief that the intention of these advertisements is to harass and intimidate Arab and Muslim residents of San Francisco and we are further concerned that they are being displayed now, during a two week time period that has seen more than eight attacks on mosques and Islamic institutions the most recent being a vandalism of a Muslim grave sight in IL yesterday. As such it is critical that to be seen as sincere and to actually remedy the damage caused by these advertisements that all responses directly address anti-Muslim sentiment (Islamophobia) and not merely diversity generally.

Accordingly, we strongly recommend the SFMTA in coordination with Arab, Muslim, Middle Eastern and South Asian (AMEMSA) organizations take the following steps in responding to the display of these problematic advertisements:

It is our position that because the damage is ongoing the response must be immediate. Further it is our understanding that analysis and research around the review of MUNI advertising policies has already begun and as such we ask that you meet with us quickly so that we may begin to work together to develop shared solutions. It is important that in moving forward the voices of the AMEMSA community not be excluded or silenced.

Dear Mr. Reiskin:
We write to express our concern and dismay over an advertisement which has begun to appear on the exterior of municipal buses in San Francisco. This ad, sponsored by a group calling itself The American Freedom Defense Initiative, states: “In Any War Between the Civilized Man and the Savage, Support the Civilized Man.” It then goes on to say, “Support Israel, Defeat Jihad.”

While we understand the importance of free expression even for objectionable viewpoints, we as people of many faiths and backgrounds wish to express that we do not feel comfortable boarding municipal buses that display a message of hate toward people based on ethnicity or religion. We believe this advertisement is designed to intimidate Muslim, Arab and Palestinian members of the San Francisco community, to whom the advertisement unmistakably refers when it speaks of “savages.”

Currently the advertisement states only that it is paid for by The American Freedom Defense Initiative, and does not expressly state, as required by the San Francisco Municipal Transportation Agency’s (SFMTA) Advertising Policy, that “[t]he views expressed in this advertisement do not necessarily reflect the views of the San Francisco Municipal Transportation Agency.”

We call on SFMTA to immediately rectify this shortcoming. We also ask that the SFMTA hold a public meeting addressing this harmful advertisement so that members of our community can work to address the damage it has caused in our faith and community organizations, as well as to educate our fellow citizens about the danger in messages of this nature.

The American Freedom Defense Initiative is a project led by Pamela Geller. Geller, who leads a group identified by the Southern Poverty Law Center as a hate group, recently bragged that she uses a Quran, Islam’s holy text, as a doorstop.1 Geller has also called for the demolition of a mosque in Florida, and she will be speaking along with the violent racist group English Defense League’s Tommy Robinson at an international event later this summer.2 Geller’s positions include that President “Obama is a third worlder and a coward. He will do nothing but beat up on our friends to appease his Islamic overlords.”3

The First Amendment as historically interpreted may possibly provide protection to Geller’s message in the form of an advertisement on public buses, but it is important for all of us to
realize that messages of hate have a destructive, cumulative community impact. On the same day this advertisement first ran on San Francisco buses, a mosque in Ontario, CA found the limbs of a dismembered pig on the building’s front steps, a clear attempt to intimidate Muslims and interfere with their observance of Ramadan.4 Just a few days earlier, a group of young people were arrested after throwing lemons at Muslims worshipping at a mosque in Hayward, CA5 During the same window of time, a man in Morton Grove, IL, was arrested for firing a “high-velocity air rifle” at a mosque in that town, narrowly missing the security guard on duty. A second incident occurred a day later in Lombard, MI, where a bottle filled with acid was hurled at a mosque during Ramadan prayers. Likewise, an arsonist burned a mosque in Joplin, MO, to the ground, and six members of the Sikh community were killed when a white supremacist opened fire at their temple in Oak Creek, WI.

We also call on SFMTA to consider the destructive use of the word “savages” in particular. This is a word that has been used to discriminate and abuse many different communities of color and has a particularly traumatizing effect. Communities must be given a forum to address and ameliorate the harm of such loaded terms.

Despite the fact that Geller recently won a motion for preliminary injunction against New York City’s MTA on a similar advertisement, cities still have the freedom to set some limits on advertisement according in part to community civility standards, or at the very least to address the harm flowing from the advertisement. The judge in that case made clear that his ruling would not “disable city authorities from adopting rules that hold ads and commentary on the exteriors of buses to a standard of civility.”

As faith and community organizations, we have already received many calls from members concerned that this advertisement will lead to violence against and misunderstanding of their communities. Their fear is not unfounded based on the pattern of violence and intimidation that has been unleashed against the Arab, Middle Eastern, Muslim and South Asian communities in the aftermath of September 11, and that has spiked disturbingly in recent days.

Accordingly, we strongly urge SFMTA to remove this advertisement immediately from all buses until such time as the ad purchaser complies with SFMTA’s disclaimer requirement. Members of our faith and community organizations and the general public must be made aware that the advertisement is in no way endorsed by SFMTA. In addition, considering the clearly visible damage of this advertisement in a city like San Francisco, which prides itself on being an inclusive and tolerant community, we ask that SFMTA hold a public meeting and provide our communities a forum to run diversity advertisements to correct these dangerous misperceptions and to permit community members to convey the harm caused by the advertisement.

We request a meeting with transit authority officials to discuss this matter further. Please contact CAIR-SFBA Civil Rights Coordinator Rachel Roberts, at [email protected] or 408.986.9874, at your earliest possible convenience.
Thank you for your prompt attention to this serious matter.