The American Muslims for Palestine, the nation’s leading national grassroots organization dedicating 100 percent of its resources to educating the public about Palestine, is making a difference in the pro-Palestine movement in the United States. The movement is growing and AMP is at the forefront of coalition-building that is strengthening the cause by leaps and bounds. We just concluded a highly successful conference that was attended by more than 2,000 people. We hosted at least 35 nationally and internationally renowned speakers and offered a Campus Activism Track to more than 100 students from throughout the country. We are energized and ready to take on our new project and goals for 2012 that will include nationwide Jerusalem Summits and the beginning of our I Am Palestinian bus ad campaign.

Last year at this time, no one would have imagined the events that have shaken the Middle East this year. The Arab Revolutions and their impact on Palestine mean that we all must redouble our efforts to get the message out about Israel’s illegal, unjust and inhumane occupation of Palestine. With you by our side, AMP has made great strides in the past year. But we have only just begun. There is so much work ahead of us and time is of the essence!

Won’t you consider making a tax-deductible donation to AJP Educational Foundation, the fiscal sponsor of AMP? You will be supporting very important work that is making a difference and at the same time will be able to save on your taxes this year.

Your previous generous donations are very much appreciated! Take a look at the programs you supported

The Conference for Palestine in the US: A New Era of Activism 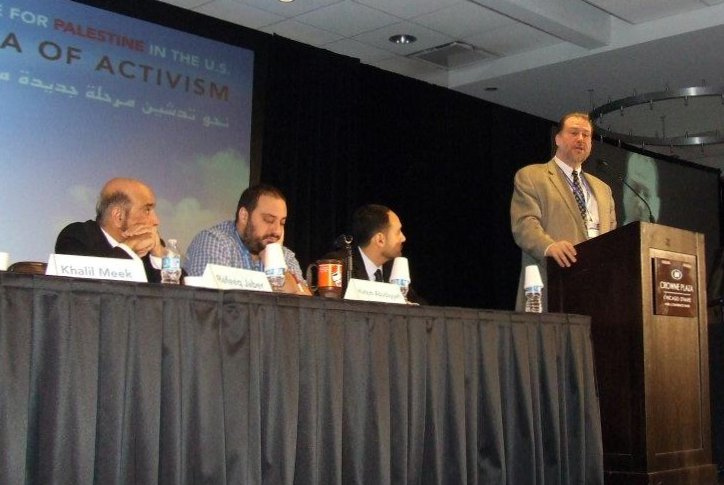 New Publications
Our newest publication, “The ADL: A protector of civil rights or silencer of free speech?” exposes the Zionist organization’s actions that include spying on American citizens and groups and, in some cases, selling that information to foreign governments; censorship; intimidation and harassment. Like our other publications, it is distributed for free at events and conferences around the country. It is also available for download on our website.

In keeping with our mission to educate, AMP has distributed three Power Points for people to present to their own groups and organizations. They include Palestine 101, Daily Life under Occupation, and What About Jerusalem?

People are looking to AMP as an expert source on Zionist organizations in the United States and their concerted efforts to maintain Israel’s occupation of Palestine through lobbying federal officials, engaging our faith communities and by combating campus activism. AMP has been making presentations on Zionist organizations throughout the United States, most recently in Philadelphia at the National Lawyers Guild annual convention.

The media is seeking out AMP now as a source for events in the Middle East as well as issues here at home. We have been interviewed by all major networks, ABC, CBS and NBC as well as FOX and regional affiliates. AMP has been mentioned in various newspapers, including the Jerusalem Post, the Washington Examiner, the Sacramento Bee and the Jewish Daily Forward, as well as hundreds of blogs. AMP also has had op-eds published on Al Jazeera English and in the San Jose Mercury News.

AMP’s media director has conducted numerous media training workshops, from California to New York.  The purpose is to teach students and adults how to engage in community journalism, the new trend that permits laypeople to submit reports and videos to a variety of media outlets, including CNN and several national newspapers.  Many of these reports make it into mainstream news reports and helps to forward the Palestinian narrative.

Each week, AMP delivers to your inbox a concise digest of the latest analysis, opinions and events relating to Palestine. You can keep up on the latest news as well as be informed of upcoming AMP events by signing up at www.ampalestine.org

AMP continues on its mission to educate the American public by continuing with the Public Library Project. The project donates a set of new books to the permanent collections of public libraries.

AMP has held several high school conferences in the Midwest and on the East Coast, which were attended by hundreds of students. The one-day events focus on history, the Islamic significance of Palestine and youth activism.

Students for Justice in Palestine

AMP acts as a resource for chapters of Students for Justice in Palestine by providing information, materials, speakers, trainings and financial support. The movement for Palestine is growing, thanks to the dedication and energy of college students.

AMP started 2011 with two national campaigns that commemorated two years since Israeli Occupation Forces massacred more than 1,400 Palestinians in Gaza in Operation Cast Lead in Gaza, and the Never Again for Anyone Tour, who goal was to empower people to question Israeli policies.

Never Again for Anyone
Working in cooperation with the International Jewish Anti-Zionist Network, AMP embarked on a national tour featuring Holocaust survivor Hajo Meyer, who spread the message that it is not anti-Semitic to criticize illegal and unjust Israeli occupation policies. Joining Dr. Meyer was Dr. Hatem Bazian, AMP chairman; and Osama Abu Irshaid, AMP board member and editor of Al Meezan newspaper.

63 Years of the Nakba: Preserving our Narrative
Palestinian member of the Knesset, Haneen Zoabi, joined AMP for a nationwide tour to commemorate 63 years of the dispossession of the Palestinian people. The events also focused on how the Nakba is still continuing in discriminatory and apartheid laws, the lack of freedom of movement, the siege on Gaza and random arrests and detentions.

Supporting other initiatives
AMP is working with the Swiss-based Defence for Children International – Palestine Section to distribute in the United States their two recent reports, “Under Attack: Settler Violence Against Palestinian Children,” and “Voices from East Jerusalem: The Situation Facing Palestinian Children.”

We believe in building broad-based coalitions to strengthen pro-Palestine activism. Our media director is on the Steering Committee of the US Campaign to End the Israeli Occupation, an umbrella organization comprised of nearly 400 member organizations; and we work with other groups such as the International Jewish Anti-Zionist Network, Jewish Voice for Peace, the Middle East Children’s Alliance, the Chicago Faith Coalition and others.

None of these accomplishments would have been possible without the Grace of Allah swt or without your support. Please help AMP continue our greatprogramming. Be a part of the change this is coming for Palestine.