(WASHINGTON, D.C. 11/1/2018) — Tomorrow marks 101 years since the British government shamefully issued the Balfour Declaration, affirming Zionist colonial ambitions in Palestine and helping to pave the way for the creation of the State of Israel. On November 2, 1917, then-U.K. Foreign Secretary Lord Arthur Balfour sent the letter to Lord Walter Rothschild, a financier and prominent Zionist leader, pledging support for "a Jewish national home in Palestine," which led to the expulsion of the majority of its native people from their land.

More than a century later, the dispossession of Palestinians continues with foreign powers still negotiating away their rights. Not only did the international community, namely the British and American governments, fail to bear legal responsibility and correct the grave injustices that were inflicted upon the Palestinians, but it has given Israel carte blanche, and, in fact, served as its enabler, to perpetuate its illegal policies of land theft, mass murder, and ethnic cleansing. 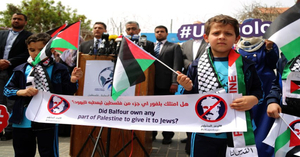 Just in the last year, we have observed in horror as the Trump Administration enacted catastrophic policies such as brazenly and unilaterally declaring Jerusalem as the capital of the Jewish ethnostate. We have further witnessed Nikki Haley's back-turning and raving attacks on the UN for even mild criticism of Israeli crimes. And we are now seeing the devastating impact on the ground of Trump's decision to defund UNRWA and withhold urgent humanitarian aid to a people living under siege and occupation. His redefining of what it means to be a Palestinian refugee has effectively liquidated the very little that remained of Palestinian rights.

Still, we recognize the perseverance of Palestinian refugees who continue to endure and resists despite all odds. After more than 70 years of a brutal military occupation and attempts at erasing their identity, Palestinians have never abandoned their struggle or hope to return to their land. Hundreds of demonstrators continue to gather peacefully every Friday at the buffer zone in northern Gaza to demand their rights and to return.

Finally, we are heartened to see a growing shift in public opinion in the U.S. with more politicians, celebrities, and notable figures publicly criticizing Israel and a biased U.S. foreign policy, and expressing support for Palestinian rights. The world is beginning to recognize Israel as yet another racist colonial enterprise and form of apartheid. A growing number of Democrats and youths are breaking the tradition of unquestioned support for Israel as more progressives are supporting BDS and sympathizing with Palestinians.

On this 101th solemn anniversary, Palestinians and Palestine solidarity activists around the world continue to demand justice from Britain for the Balfour Declaration, and for freedom and self-determination in Palestine.

To learn more about the history of Palestine, its current challenges, and ways to organize and advocate for it in the U.S., we invite you to join us in three weeks in Chicago for our 11th Annual Conference for Palestine in the U.S.—70 Years Later: Committed to Return. Register Today!