This Ramadan, Make a Date with Justice 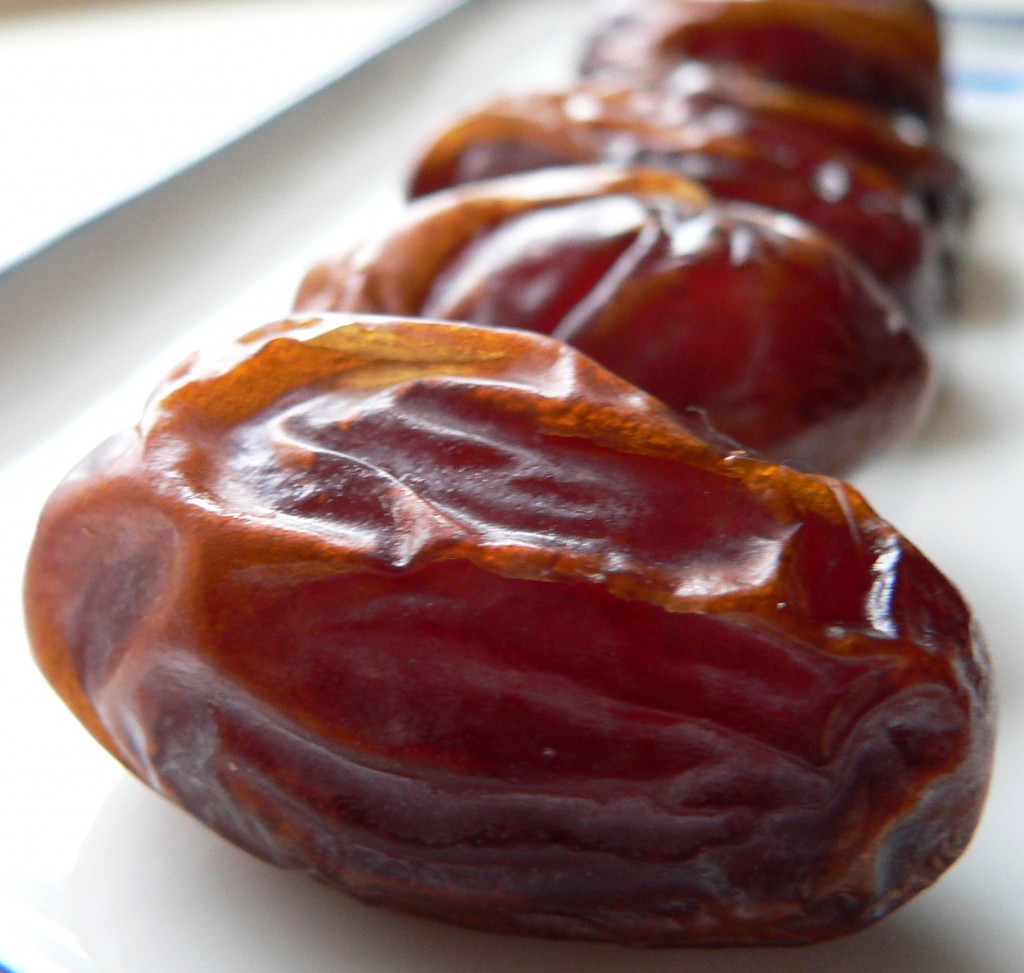 To Muslims, the date fruit is symbolic. During Ramadan, many Muslims break their fast following the sunnah of Prophet Muhammad (peace be upon him) with water and dates. But do they know the history of injustice behind the production of so many dates? Many dates are grown in illegal Israeli settlements built on occupied Palestinian land and harvested through unfair labor practices. Boycott dates under these brand names Jordan River, Jordan River-Bio Tops and King Solomon. Dates that profit the occupation are marketed by the Israeli companyHadilklaim through a variety of distributors. Dates that say they are produced in the West Bank and the Jordan Valley are most likely also Israeli occupation dates.

Learn more about Boycott, Divestment and Sanctions and the Ramadan date boycott

Hadiklaim is an Israeli date growers cooperative. It is the biggest date exporter in what is called Israel. Some of the company’s dates originate from the occupied Jordan Valley and Dead Sea area. Dates from the Megilot Dead Sea Regional Council – a regional council of settlements in the northern Dead Sea area – are exported solely by Hadiklaim. The company markets dates under the brand names of Jordan River, Jordan River Bio-Top and King Solomon, and under private labels of supermarket chains.The company's annual revenue is between $50 million and $100 million per year.

Dates in the Israeli Economy

Israel produces over half of the world’s leading variety of dates, the Medjool date.1 The majority of these are grown in settlements in the Jordan Valley and Dead Sea areas on occupied Palestinian land, and then exported worldwide for a profit of $265 million for Israeli export companies.2 3

Dates were Israel's leading fruit export in 2005.1 Export of Israeli dates to Europe and North America increased by 16% in 2011.3 Large quantities of these are exported specifically during Ramadan.1 Currently, most Israeli dates are marketed by Hadiklaim, a company that exports dates from Israel and its settlements in the Occupied Territories, especially in the Jordan Valley. 4 Hadiklaim markets the dates under the brand names of Jordan River, Jordan River Bio-Top and King Solomon, and under the private labels of supermarket chains.4

Settlements in Violation of International Law

Since 1967, Israel has enforced a military occupation throughout the West Bank, including the Jordan Valley and the northern Dead Sea areas, which contain the largest arable land reserves in the West Bank.7 Israel prevents the development of Palestinian communities in these areas by systematically demolishing the homes and structures of the area’s Palestinian communities, blocking Palestinians from accessing the Valley’s water resources, and restricting Palesti­­­­nian movement therein.5

“In 1967, when Israel occupied the West Bank, I was seven years old. Two-thirds of my family moved to the East Bank because of the war…Israel took control of the 500 dunams that we leased from the Jordanian government and had worked for seven years, and prohibited us from getting to them... Now they are date-palm orchards of the Yafit settlement…we’re forbidden to enter the area.”6
~ Hussein Muhammad Hassan Sa'eydeh, 51, married with six children, is an unemployed farmer and a resident of al-'Uja, in Jericho District, the West Bank.

Israel has also taken control of most of the Valley’s water sources, reserving them almost exclusively for settlers. Most of the water is allocated to the 37 settlements established in the Jordan Valley area, whose economy is based on agriculture. Less than 10,000 settlers live in the area, yet they are allocated almost 33% of the water, while all Palestinians in the West Bank, some 2.5 million people, are allocated the remaining 67%.5 This water has enabled Israeli settlers to develop intensive farming methods and to work the land year round, with most of the produce being exported.5These exports, including dates, contribute significantly to the settlements’ economic viability.

Moreover, despite a military order requiring payment of a minimum wage equal to that paid in Israel, Palestinians working in the settlements receive less than the minimum wage.9 Typically, they earn $2 an hour or less, and pay is often withheld for several months.8 10

On date plantations in particular, reports indicate that Palestinian laborers in the Jordan Valley are often required to remain atop date trees throughout the entire workday (up to eight hours) without any breaks – even to use the bathroom. These trees can be up to forty feet tall.11

"As soon as I climb up the tree, the only thing I think about is how to get down from it," says a worker from the village of Jiftlik, in the Jordan Rift Valley. "I don't think about anything other than how not to fall out of the tree and how to manage to complete the quota. I know that at any moment I can fall and die, or fall and become [permanently disabled], break an arm or a leg. So we work with one hand and hold the tree with the other. It's terribly hard. Your body cramps up. The people are nervous, afraid. The whole time you are crouching, on your feet."11

There is a custom of leaving workers on the tree for the whole day, known as the "taxi driver" phenomenon: the worker is taken up at the start of the day and collected by a taxi driver at the end. Several Israeli employers in the Jordan Valley use this method.11

Palestinian child laborers are also subject to exploitation in the settlements. In 2008, the Palestinian Central Bureau of Statistics found that more than 7,000 children between five and seventeen years of age were working in the Jordan Valley alone.10 This figure has since increased, and does not include undocumented working children. 10 Settlers often recruit children through subcontractors, so that they have no direct contracts with minors, who have no official employee status or rights.10

On date plantations, many children are employed because employers perceive them as “quick and light” and able to “climb trees faster.”11 Children often work on dangerous construction sites that do not comply with Israeli health and safety regulations. When accidents occur, as they often do, they receive no insurance or protection.10

Consumer Boycotts and What You Can Do

In July 2005, over 170 Palestinian civil society organizations joined together to call for a Boycott, Divestment and Sanctions movement to pressure Israel until it complies with international law and universal principles of human rights. 12Consumers can voice their opposition to Israel’s human rights abuses by participating in a consumer boycott of both Israeli and non-Israeli products and companies that profit from the occupation.

Over the past few years, groups in the United Kingdom and South Africa have responded to the Palestinian call to boycott products that support human rights abuses by organizing campaigns to boycott Israeli dates.13 One of the companies targeted, Agrexco—a company half owned by the Israeli government—also exports Israeli dates from the occupied territories.14 In September 2011, following a wider campaign lasting over six years and taking place in more than fifteen countries, Agrexco was forced to enter into liquidation.15

American Muslims for Palestine (AMP) has joined these voices by promoting a boycott of Israeli occupation dates in several cities across the United States. AMP calls on Muslims and other people of conscience to refrain from purchasing and selling dates that support settlements on Occupied Palestinian Territory and inhumane labor practices.

Brands of dates grown in Israeli settlements include Jordan River, Jordan River Bio-Top, King Solomon, and several others. Israeli occupation dates are labeled as Products of the West Bank, the Jordan Valley, or Israel. AMP urges consumers and business owners to boycott dates that have these labels. Products packaged in Israel or the Occupied Palestinian Territories can also be recognized by their barcodes beginning with 729.

This Ramadan, AMP asks Muslims to uphold the ethics of their faith, and only buy and sell dates that are not profiting from Israeli occupation. Instead of buying and selling dates grown in Israeli settlements, you can choose to support the Palestinian economy by buying Palestinian-produced, fair-trade Medjool dates from Zaytoun by visiting www.zaytoun.org.

A boycott is an individual act that becomes much more powerful when it finds strong support in organizations and communities willing to act as a collective.