How Does Aid to Israel Impact Us? 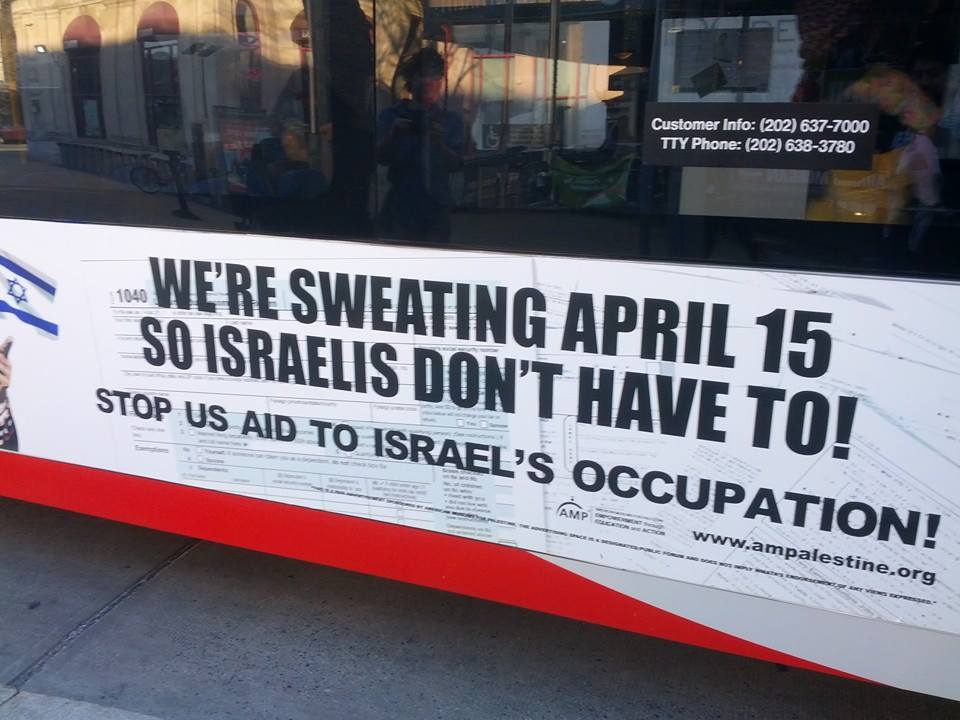 Help us bring this ad to your city!

Learn more about US Aid to Israel

WASHINGTON DC, 03/17/2014) — The American Muslims for Palestine (AMP), a national education and advocacy group, is using the beloved Cherry Blossom Festival to attract attention to its message: US aid to Israel has got to stop.

The ad, which depicts Uncle Sam holding an Israeli flag with the tagline “Americans are sweating April 15 so Israelis don’t have to,” calls for an end of US foreign aid to Israel. It is appearing on Metro buses on the Cherry Blossom Festival route in order to attract the attention of tourists.

“While Americans are struggling to pay their taxes during these difficult economic times, our hard-earned money is going to a country that has implemented the last and longest-lasting military occupation in the modern world,” said AMP board member Dr. Osama Abu Irshaid, of the DC area.

The United States is committed to a 10-year, $30-billion deal, which ends in 2018. Currently, the United States gives Israel more than $3 billion per year in military and other aid. That money largely supports Israel’s occupation, which is illegal under international law and deprives Palestinians of their human rights.

“We tie foreign aid to human rights in other countries. Why don’t we do the same in Israel?” Dr. Abu Irshaid asked. “Here in America, schools have cut programs, laid off teachers, cities are going bankrupt, millions of unemployed have been dropped from unemployment benefits and benefits for veterans have been cut. That $3 billion is sorely needed here at home.”

AMP is a national nonprofit organization based near Chicago, whose mission is to educate the American public about issues related to Palestine and its rich cultural and historical heritage. AMP calls for an end to the occupation. Without US financial assistance, Israel would not be able to maintain the occupation, the group asserts.

The ad campaign, which will run in the DC Metro area until April 13, is the second national campaign for AMP. The first ad, which debuted in March 2013 in New York City, raised the issue of Israeli apartheid.

Dr. Osama Abu Irshaid is available for interviews. He can be reached at