Gaza Strip Soil Has Been Contaminated Due to Bombings: Population in Danger

The 2006 and 2009 Israeli bombings in Gaza Strip have left a high concentration of toxic metals in the soil. Those metals can cause tumours and problems with fertility, and they can have serious effects on newly born babies, like deformities and genetic pathologies. The metals are in particular tungsten, mercury, molybdenum, cadmium and cobalt.

Those are the results of a study carried out by NWRC, a group of independent scientists and doctors based in Italy which studies the non-conventional weapons and their middle-term effects on the residents of areas afflicted by the conflicts. The NWRC working group has analysed four craters: two of them were formed during the July 2006 bombings, the first one in the city of Beit Hanoun and the second one in Jabalia Camp, and the two others are a result of the January 2009 bombings in Tufah, the Gaza City suburb. Moreover, the group has analysed the powder remaining inside a shell of the White Phosphorus bomb THS89D112-003 155MM M825E11 exploded near the Al Wafa hospital in January 2009.

The study has compared the levels of concentration of metals in the craters with those indicated in a report on the presence of metals in the Gaza Strip soil, based on samples collected from 170 locations in 20052. The analyses have shown anomalous concentrations of these metals inside the craters, indicating a contamination of the soil. This, given the precarious living conditions, especially in refugee camps, increases the risk of exposure to toxic substances, through the skin, through the lungs and through ingestion.

“Our study,” says Paola Manduca, spokesperson of the New Weapons Research Group, genetics teacher and researcher at the University of Genoa, “indicates an anomalous presence of toxic elements in the soil. It is essential to intervene at once to limit the effects of the contamination on people, animals and cultivations. We need strategies to help the contaminated people. We hope,” she adds, “that the research performed so far by the Goldstone Commission, requested by the United Nations, will not only analyse the abuses of human rights, but that it will also concentrate on the long-term effects that the various types of weapons have on the environment and on the population. A rapid collection of data should be carried out”.

All craters were large and the sampling was conducted along one of the sides of the slope of each crater. All the craters are located in the northern part of the Gaza Strip, as you can see on the map: 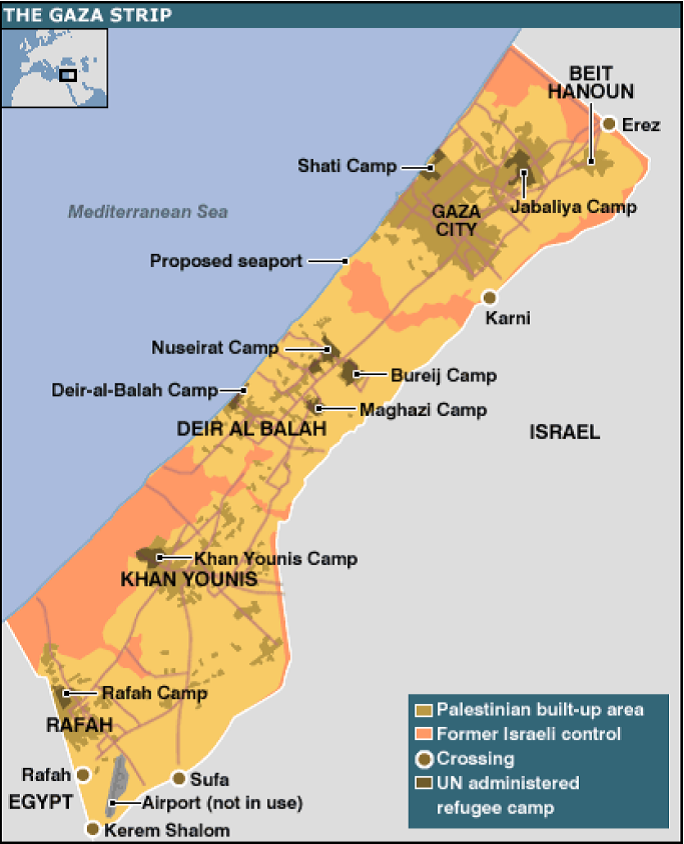 The data collected in the craters

The results of the analysis of metal quantification by ICP/MS (a type of mass spectrometry that is highly sensitive and capable of the determination of a range of metals and several non-metals) show a presence, higher than the expected average quantity, of the following metals:

Significant amounts of tungsten (between 20 and 42 times the expected average level in the soil) and of mercury (between 8 and 16 times the maximum level registered in 2003) have been found in the crater in Beit Hanoun. The remaining three examined craters had the expected levels of these metals in the soil. Both tungsten and mercury are rare in nature and the fact that they were found in one of the craters means that they were released by the explosion of a bomb. This spreads the metals within an unknown range and it might have caused a contamination of the water, of the soil and of the cultivations.

Both metals at medium-high concentrations have serious toxic and carcinogenic effects on humans. Mercury is a cancer-causing agent which is transferred through the skin as well; during the pregnancy it is transferred to the foetus and causes fetotoxicity in animals. Tungsten and the alloys of tungsten are genotoxic and are suspected to be fetotoxic. At low concentration, tungsten can cause breathing and neurological pathologies.

Molibden is a rare element in the soil, has been found at high concentrations in all the examined craters. The amounts found range from 0,1 to 12 ppm, which means that they are between 25 and 3000 times higher than the average levels in the soil (0,004 ppm). Molibden is commonly used in alloys with various metals (single and multiple metals), some of which are used as components of weapons.

Molibden is toxic for sperms and in high levels has effects on spermatogenesis.

Cadmium is an element normally present in low concentrations in the soil of Gaza (0,093 ppm according to the 2003 study). The study has detected a high amount of cadmium (up to 7,3 times the average level) in one of the craters from the 2009 bombing in Tufah.

Cadmium is a known carcinogen.

Cobalt was found in both craters in Tufah, in amounts reaching 26,2 ppm, about 5 times the expected average level in the soil (5,1 ppm).

Cobalt can inhibit DNA repair and cause DNA breakage, with mutagenic effects.

Nickel, manganese, copper and zinc were found in one of the craters in Tufah, with levels two times higher than the average.

Some of the nickel and manganese compounds are carcinogenic.

Strontium has also been found in amounts higher than average in earth crust in all craters, but its concentration varies in different locations and there are no data available for the Gaza Strip soil. Thus, it is not possible to establish whether there is an anomalous presence.

These bombs are built mostly with alternating sectors of WP and aluminium, a potentially harmful and fetotoxic metal, but they contain other metals as well.

Therefore, the effects of the heavy bombings of the Gaza Strip are caused not only by the WP, but by other harmful metals which remain in the soil and contaminate it. The NWRC working group has collected and tested for the presence of metals the deposit of powder adhering to the inside of a bomb(see the photo below) exploded on 6 January 2009 near the Al Wafa hospital, and collected on 28 January on the spot of the explosion. The powder was scraped with a plastic spoon, from the sides and from the bottom of the bomb. 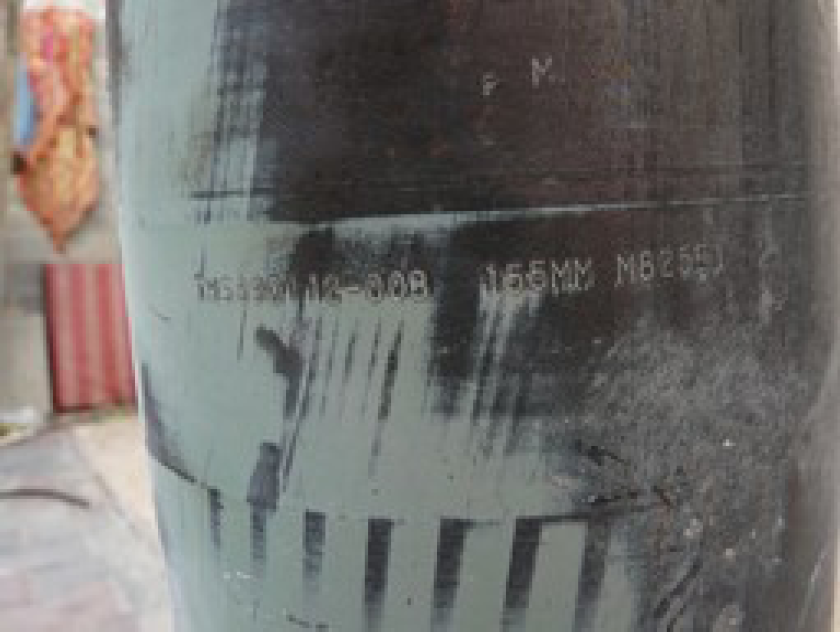 As expected, the analysis have shown high amounts of aluminium in the powder. Moreover, the powder contained relevant amounts of molybdenum (125-200 times higher than the average level in the soil), tungsten (up to 41 times) and of mercury (up to 160 times). This proves that these bombs can disperse toxic metals as well, a part from phosphorus, and that their widespread use during the Gaza Strip war, combined with the explosions in open air, at a certain distance from the ground, may have caused a diffusion of these metals in the territory.