Toxic and carcinogenic metals, able to produce genetic mutations, have been found in the tissues of people wounded in Gaza during Israeli military operations of 2006 and 2009. The research has been carried out on wounds provoked by weapons that did not leave fragments in the bodies of the victims, a peculiarity that was pointed out repeatedly by doctors in Gaza. This shows that experimental weapons, whose effects are still to be assessed, were used.

The researchers compared the quantity of 32 elements present in the tissues through ICP/MS (a type of highly sensitive mass spectrometry) . The job, carried out by laboratories of Sapienza University of Rome (Italy), Chalmer University (Sweden) and Beirut University (Lebanon), was coordinated by the New Weapons Research Group (Nwrg), an independent committee of scientists and experts based in Italy, who is studying the use of unconventional weapons and their mid-term effects on the population of after-war areas. The relevant presence of toxic and carcinogenic metals found in the wound tissues points to direct risks for survivors, but also to the possibility of environmental contamination.

Biopsies of tissues were performed by doctors of Shifa hospital, in Gaza city, who selected and classified the type of wounds. Research was conducted on 16 tissue samples belonging to 13 victims. Four biopsies were taken in June 2006, during the operation “Summer Rains”, while the others were taken in the first week of January 2009, during the operation “Cast Lead”. All tissues were appropriately preserved and then examined by each of the three universities.

Tissues belong to four types of wound: amputation (marked with an “A” in the study), charred (C), burns (B), multiple piercing wounds by white phosphorus (M). The following elements were found in quantities well beyond normal:

Some of these elements are carcinogenic (mercury, arsenic, cadmium, chromium, nickel and uranium), others are potentially carcinogenic (cobalt and vanadium), others are also fetotoxic (alluminium, copper, barium, lead and manganese). The first ones can produce genetic mutations; the second ones can have the same effect on animals, but they are not proven to do the same on people; the third ones have toxic effects on people ad can affect either the embryo or the foetus in pregnant women. All metals found in high amounts have pathogenic effects on human respiratory organs, kidney and skin and affect sexual and neurological development and functions.

The combination of metals in each type of wound is referred to as a “metal signature”, as shown in the following picture:

“Nobody – says professor Paola Manduca, spokesperson for the New Weapons Research Group, genetics teacher and researcher at the University of Genoa – had never conducted bioptic analysis on tissue samples from wounds. We have focused on wounds made by weapons that do not leave fragments, as the doctors from Gaza reported on them repeatedly. We wanted to verify the presence of metals that remained on the skin and in the derma. It was suspected that these metals were present in the weapons that leave no fragments, but it had never been demonstrated before. To our surprise even the burns provoked by white phosporus contain high amount of metals. Moreover, the presence of these metals in the weapons implies that they have been dispersed in the environment, in unknown amounts and range; they have been inhaled by the victims and by bystanders, thus constituting a risk for survivors and for people that were not directly hit by the bombing.”

The research follows two previous studies conducted by Nwrg. The former was published on december 17th 2009 and statued the presence of toxic metals in areas around the craters provoked by the Israeli bombing on Gaza Strip. The latter was published on March 17 th 2010 and it pointed out the presence of toxic metals in hair samples of Palestinian children of Gaza Strip area hit by Israeli bombings. Both point to the presence of environmental contamination, aggravated by the living conditions on the ground and often in shelters exposed to wind and dust, due to the impossibility to rebuild housing imposed by the Israeli blockade to the entrance of needed building materials and tools.

Biopsies: wound types examples from which tissue samples have been taken 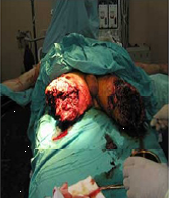 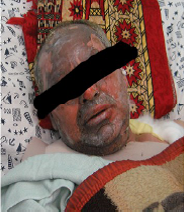 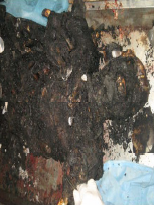 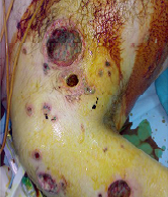